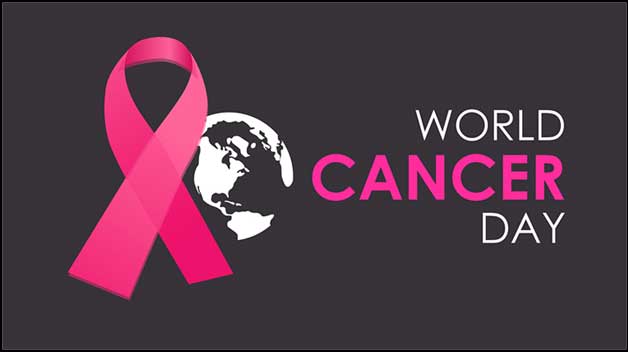 Cancer is one of the leading causes of morbidity and mortality worldwide. After cardiovascular diseases, it ranks second in the causation of death in the developing countries. So the World Cancer Day, which is annually observed on the 4th of February, is intended to increase the global awareness for cancer. The concept of celebrating World Cancer Day originated in Paris in 2000, at the first World Summit Against Cancer held in Paris.

The leaders of various government agencies, and Cancer organizations from the various parts of the world signed a document “Charter of Paris Against cancer” which contained 10 articles that outlined a cooperative global commitment aimed at improving the quality of life of the cancer patients. It also talked of regular investments towards advancements in Cancer research, prevention and treatment. In some places the World Cancer Day is recognized with a parade or a local fund -raising event, such as a walk, a concert, or an auction.

Cancer is one of the leading killer disease in the world. Put simply, this year alone, nearly 9.6 million people will die of cancer, and left unchecked, the number of deaths will increase to 13.2 million per year by 2030.

Despite numerous advancements in research pertaining to cancer, several patients fail to treatment and succumb to the disease. Surgery, radiotherapy and chemotherapy continue to remain as the mainstay of treatment for most cancers. Though surgery aims at removing the whole volume of the disease, combination with radiotherapy and chemotherapy offers better results for different type of cancer.

Intense research in this specialty has also led to the launching of newer chemotherapeutic agents and newer techniques of delivering radiation to fight against cancer. Despite all these efforts, it has been seen that some cancers convert into more aggressive variant and also show a tendency to spread to the distant organs.

As per research, it’s an established fact that chemotherapy and radiotherapy kills 97 to 98 % of cancer cells. But the remaining 3 to 4 % cancer cells evade the treatment onslaught and get converted to Cancer Stem Cells. Since most of the Indian patients present in an advanced stage, the rate of Cancer relapse and recurrence is high.

There is growing evidence that a subgroup of cancer cells, viz. Cancer Stem Cell, is responsible for the increasing resistance and relapse of the disease. The first evidence of these cells also known as Tumor Initiating Cells (TICs) was reported by Bonnet and Dick in 1997 in Leukemia patients. Ever since a lot of research work is ongoing to ascertain the origin of these cells which is still unclear and controversial. Cellular markers for its identification and also the development of different therapeutic strategy targeting their pathway are being studied. Besides identification in Leukemia patients, these cells have been seen in certain solid tumors like lung cancer, pancreatic cancer, liver cancer, colon cancer, breast cancer, brain tumor and ovarian cancer.

The rate of recurrence among cancer patients can be high. Head and Neck cancers in an advanced stage can have a failure rate of 50-80% while ovarian cancer can have a failure as high at 85%. Soft tissue sarcomas can recur in approximately 50% of patients following adjuvant chemotherapy. While most patients diagnosed with this disease in their late stage can have recurrence approaching 100%.

Therefore a greater need for the best oncology surgeons is always felt. Patients who have already undergone primary cancer treatment and are diagnosed with cancer relapse or recurrence seek the best doctors and oncologist for a safe and successful treatment.

It’s a human nature that people take thing for granted until and unless it affects them. They wait for the disease to hit them and only after that some action is taken. And it’s not only the case in India (Delhi, Mumbai, Orissa, Bangalore, Punjabi etc) but also seen world-wide in U.S., U.K., Europe and other countries. As it is said “Prevention is better than Cure” a greater step would be to consult doctors and surgeons beforehand. We also must take in consideration that the best prevention to anything is to change our habits from the start.

Ironically, the cancer stem cells are induced by the chemotherapeutic drugs and also by radiotherapy which form an integral part of the cancer treatment. Known for its higher invasive potential, these cells produced during the course of the treatment form a major cause for treatment failure, relapse and also for distant metastasis. The very presence of these cancer stem cells makes the patient resistant to the conventional treatment.

So to identify these cancer stem cells, cell surface markers and different proteins produced by them have been used. To handle these issues, the last few decade, has seen a dramatic change in the treatment of cancer. The conventional therapies have now been added with targeted therapies which work to inhibit the cancer stem cell -specific pathways. Finally, a breakthrough has been made with immunotherapy for targeting these cells.

Curcumin and Its Anti-Cancer Effects

There is a growing body of research indicating that Cancer Stem Cells can be handled with efficiency using natural substances present in our regular diet. Curcumin, an extract from Haldi (turmeric), has been extensively used with significant improvement in the treatment by oncologists as results of breast cancer, lung cancer, melanoma, genito-urinary cancer and gastro-intestinal cancers.

Curcumin and its anti-cancer effects suppress all the 3 stages of Carcinogenesis: – Cancer Initiation, Promotion & Progression. Though Haldi is commonly used in the Indian diet as a normal spice, an amount of 25-30gm is required for its anti-cancer effect, which humanly is not possible to consume. The pharmaceutical industry on the other hand has been able to successfully extract Curcumin from haldi and increase its bioavailability by dispensing it through nano-technology. It’s seen that the optimum dose required is 4gm/day for most cancers with a tolerable limit of 12gm/day.

It has been scientifically proven that Curcumin reduces the level of various cytokines (IL-6, IL-8 and IL-1) produced during destruction of the cancer cells which actually stimulate the formation of cancer stem cells. It also exerts it’s effect at multiple sites of the Cancer Stem Cell pathway. The other beneficial effect of curcumin is it’s increased uptake by the malignant cells hence exerting maximum killing effect on these cells.

Even the best oncology surgeons suggest taking as much precautions as possible. Ginger and green tea also has undergone several experimentally based trials and has had a lot of peer-reviewed publications. Ginger with the presence of 6-shogaol, the pungent substance in the stem has been extensively tried in breast cancer. While green tea exerts its anti-cancer effect through EGCG produced during the brewing of tea. Three to five minutes of steeping of the tea in hot water releases this chemical substance which exerts it’s anti-cancer effect on breast, lung, stomach, esophagus, colorectal, pancreas and bladder.

Even though looking for alternatives are necessary not all alternatives that we hear and learn from others are not entirely safe so it is mandatory to consult a professional doctor, surgeon or an oncologist before opting for any alternative treatment.