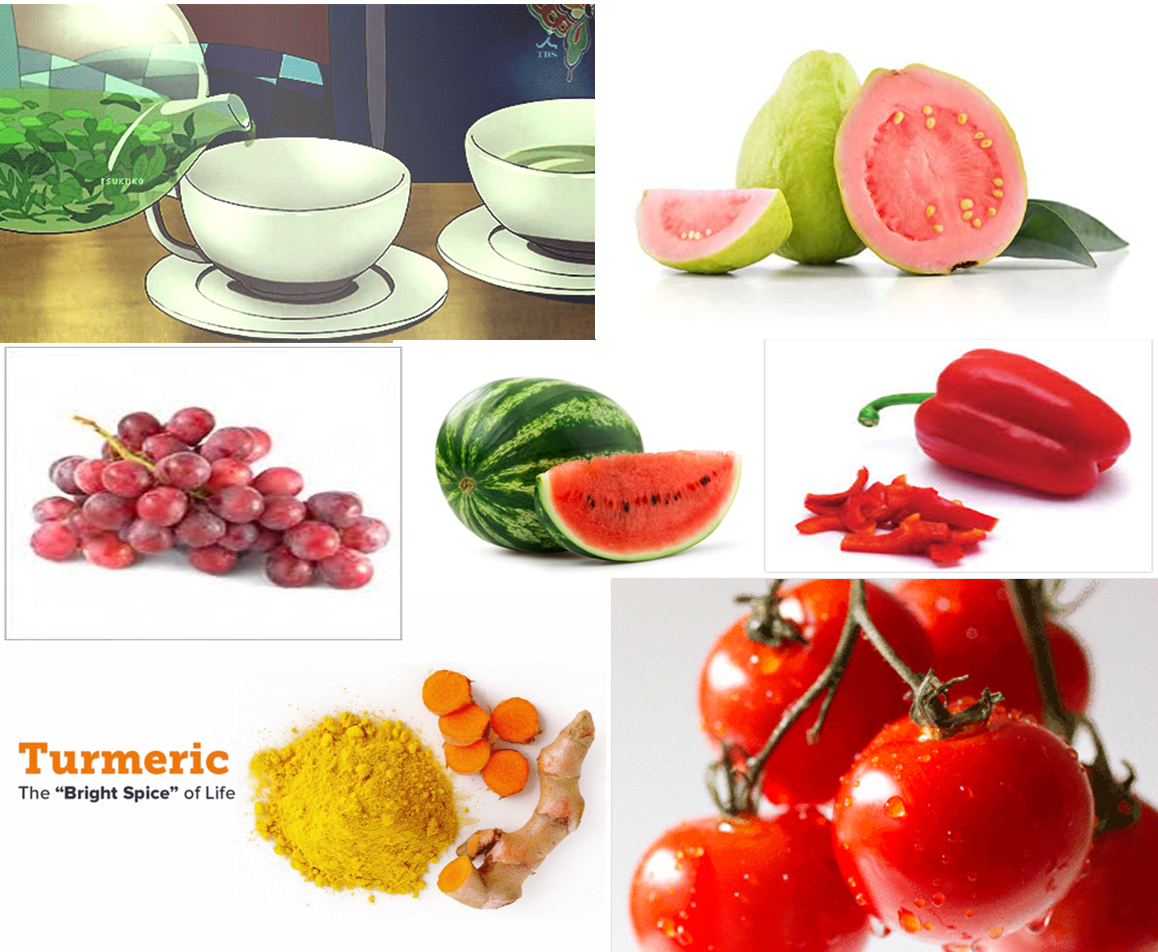 30-40% of all cancers can be prevented by lifestyle and dietary measures alone as estimated by the American Institute for Cancer Research and the World Cancer Research Fund.

It is said that about 90,000 cancer deaths can be avoided if the adult population maintained a normal weight with a BMI< 25.0 .

According to the World Cancer Research Fund and the American Institute for Cancer Research fund, there is a convincing evidence that fruits and vegetables reduce the risk of oral , pharynx, oesophagus , lung , stomach , colon and rectal carcinoma. Also a risk reduction is seen in carcinoma of the larynx, bladder, Breast and Pancreas.

Turmeric ( Curcumin ) : is the number one foodstuff which has maximum cancer protective effect. Food rich in Carotenoids , Lycopene, Sulforaphones , Flavonoids , Zeananthin are considered as rich sources of anti-cancer substances.

TURMERIC : ( Haldi)
Also known as the Indian saffron, turmeric the wonder spice has been used for times immemorial. Traditionally, it has been used for improving memory, for improving the circulation and digestion.
The important component in turmeric are the curcuminoids and it”s oil and the major chunk of the health benefits are attributed to curcumin which comprises of 50 – 60% of turmeric. Studies have revealed that curcumin has 20 molecules of antibiotic property, 14 molecules with cancer preventive potential and 12 with anti – tumour effect.

Curcumin modulates genetic activity and promotes healthy cell function. It inhibits the proliferation of tumour cells, decreases the inflammation, inhibits the transformation of the cells from normal to tumour cells, inhibits angiogenesis. Curcumin helps restore the immune system and prevents tumour – induced immunosuppression. It is known to sensitize the tumour cells to chemotherapy and radiotherapy and also it protects the normal cells from the damaging effects of anti- cancer drugs. Curcumin also prevents the pre-cancerous cells from transforming into Cancer. The anti-cancer potential of curcumin has been tapped for Cancers of the Head and Neck, Breast, GIT, Lung, Ovary, Melanoma, Sarcoma, Leukemia and Lymphomas.

To meet the anti-cancer dosage of turmeric , one has to consume 25-30gm of haldi powder per day. But the bioavailability of turmeric in the raw state is low and 75% of it is excreted out of the system in the stool. Therefore to increase it’s bioavailability, turmeric can be taken with olive oil, flaxseed, coconut oil. Lately, the commercial preparations are available in the nanoparticle form and are prescribed to a dose of 4-8gm per day for it’s anti-cancer effect. It is advisable to take curcumin after food to prevent gastric irritation and also advisable not be taken with other medication.

GREEN TEA : The tradition of drinking tea dates back to 5000years. Green tea has been a popular beverage among the Chinese and Japanese. But it’s popularity among the common populace all over the world has been due to it’s anti-cancer property attributed to the abundance of the anti-oxidant viz., EGCG (Epigallocatechin-3- gallate ). EGCG is known to prevent the growth of the cancer cells and also tends to kill the cancer cells.

Dose : two – three cups of green tea every day.
The health benefits of green tea depend on the type and quality of tea leaves. Secondly, the time spent on brewing and the temperature used for brewing, also impacted the availability of it’s anti-oxidants.
Studies have shown Green tea to reduce the risk of skin , stomach, bladder, ovarian, breast, esophageal , colorectal, pancreatic and lung cancer.

LYCOPENE : It is a red -orange carotene pigment, and a powerful flavonoid anti-oxidant, primarily found in tomatoes and tomato-based product. Watermelon, pink grapefruit and red bell peppers are other foodstuffs which are rich in lycopene. Regular consumption of this substance reduces the risk of prostate cancer. Increased intake of tomato, tomato sauce, and juice have lowered the risk of prostate cancer by 35%. While other lab tests have shown lycopene to be detrimental to other types of cancer viz. breast, lung and endometrial carcinoma. Besides protection from cancer, this substance also protects the body from the harmful effects of UV rays.

What needs to be remembered is that lycopene in cooked tomatoes is more bioavailable than the raw tomatoes since lycopene gets activated only when heated. Also, one should never refrigerate tomatoes since it halts the process of ripening and diminshes it’s flavor and texture. Besides being a rich source of lycopene, tomatoes are rich in A, C, potassium and Magnanese, vit. E , thiamin , niacin , vit B6 , Folate , Magnesium , phosphorous and copper. But the downside is that tomatoes contain Solanine which worsen and aggravate any inflammatory situation.

RESVERATROL : Belongs to the family of polyphenols, and is a potent anti-oxidant, which is found in the red grape skin, pomegranate, peanuts, berries, raspberries and mulberries. A rich source of resveratrol is red grape wine, though not recommended to be consumed in great amounts. This compound is known to be a radio and a chemosensitizer. Studies have shown that Leukemia ( AML), Multiple Myeloma, Pancreatic cancer show a favourable response with the use of this substance.

Grape Seed Extracts : the bio active substance found in the grape seed extract have the ability to selectively target certain type of cancer cells and have been shown to create an environment unfavourable for the growth of head and neck cancer cells.

The richest source of alpha – carotene are : carrots, carrot juice, pumpkin and winter squash. There is approximately One microgram of alpha carotene for every 2 microgram of beta carotene in carrots. Carrots are also rich in beta – carotene, which protects the cell membrane from damaging effect of toxic substances and slows the growth of cancer cells. It has a proven role in the treatment of Leukemia.

CRUCIFEROUS VEGETABLES : Broccoli , cauliflower , cabbage , Brussels, Collards , Kale : contain Sulforaphane and Indole – 3 – carbinols which have anti- cancer properties. These vegetables help to detoxify the body and prevents precancerous cells from developing into malignant tumours . According to the World Cancer Research Fund and the American Institute for Cancer: these vegetables protect individuals from: Oral, Oesophagus and Stomach cancer.

The intake of cruciferous vegetables : was inversely related to the risk of breast cancer. A high intake of these vegetables lowered the risk of bladder cancer by 51%. Three or more servings per week resulted in a 41% decrease risk in Prostate cancer.

BROCCOLI and Broccoli sprouts : have a very high concentration of Sulforaphane, a naturally occurring organic sulphur compound which stimulates the immune system and protects the blood vessels and has an anti-inflammatory effect. These sulforaphanes are also known to reduce the reactive oxygen species by as much as 73%, thereby preventing cell damage. The compound originates in the seed and is not made in the plant. One sprout contains all of the Sulforaphane that is present in a full grown broccoli plant. What one needs to do is steam the broccoli spears for 3-4 minutes, or boil it to optimise the sulforaphane content. Hence eating raw broccoli does not give any cancer protective benefit. Studies have shown broccoli in the prevention of colon, prostate, breast and tobacco – induced lung cancer. Three servings per week have shown to reduce the risk of prostate cancer by 60%.

Broccoli should not be frozen, since it loses it’s ability to produce sulforaphane is eventually destroyed during the process of blanching process

DIETARY FIBRES: Dietary fibres include a wide variety of plant carbohydrates which human beings cannot digest. Good sources are Flax seed, dried beans, vegetables, whole grains, and fruits. Wheat bran, fruit peels and skins, nuts, seeds are insoluble fibres while beans, peas, oat bran have soluble fibres. Refined flour products lack in wheat germ and bran, so they have 78% less fibre, an average of 74% less of the vitamin B and Vitamin E and 69% less of the minerals. Studies from various centres have shown that high fibre diet have been able to reduce the risk of Colo-rectal cancer. Fruits, vegetables and fibres increase the stool bulk and speeds the transit of food through the colon thereby reducing the absorption of toxins in the colonic mucosa. The fermentation of the fibres produces short chain fatty acids like Butyrate, which may protect against colo- rectal cancer. It also inhibits the production of bile acids which lowers the pH thereby reducing the incidence of colorectal cancer.

FOLATE and FOLIC ACID : Is a dark green leafy vegetable vitamin which plays an integral role in the DNA methylation and DNA synthesis and works in conjunction with vit.B6 and vitamin B12. Though Folic acid and Folate is used interchangeably, their metabolic effects are quite different. Folate is the bio available natural form of B9 found in variety of plants and animals. Folic acid, which is readily utilised by the body, is the synthetic form of the vitamin and is primarily found in food supplements and fortified foods. Rich sources of it are – vegetables, beans, fruits ( citrus fruits, papaya, orange, grapes, strawberries), whole grains and fortified breakfast cereals. Peanuts, almond, pumpkin, sesame and sunflower are other sources. It is seen that Colon, rectal and breast cancer incidence gets lowered with higher intake of folic acid.

GARLIC : which belongs to the Alliaceous family, has a strong odour because of the sulphur compounds. The medicinal value of garlic is attributed to Allicin which is formed when Allin, comes in contact with the enzyme Allinase. To facilitate this process it is advisable to eat chopped or crushed garlic. Heated form deactivates the enzyme, therefore it loses it’s powerful medicinal value. Studies have shown garlic to stop the cancer – causing substances from forming in the body, in speeding up the DNA repair and killing cancer cells. Other foodstuffs from the Alliaceous group : onions, leeks, shallots, chives also contain sulphur which facilitate the death of Prostate, Colon, Breast and Lung Cancer Cells .

GINGER : has powerful anti- inflammatory property which can slow the tumour growth. The spicy root is helpful in relieving nausea, migraine, soar muscles and Arthritis. When tested in- vitro, ginger can kill ovarian cancer cells faster than chemotherapy, according to a study done at the Univ. of Michigan Comprehensive Cancer Canter.

COCONUT OIL : has over 62% MCT. In contrast to the long chain fatty acids, MCT’s are easily utilised for energy purposes. MCT is fantastic for weight loss and also perfect for digesting fats. These oils are rich in Lauric and Caprylic acid which makes coconut oil anti- inflammatory and also gives it anti- microbial property. Virgin coconut oil is more beneficial since the refined oil goes through a process of bleaching and deodorization. The virgin coconut oil has greater anti- oxidant status. It can also be used as an antiseptic agent to help fight infections. Eating as little as two tablespoons of coconut oil or incorporating it into cooking has immense healing and preventive health benefits. The Lauric and capric acid are effective in killing Candida Albicans, prolonged exposure of which can induce cancerous changes. Coconut oil also has been seen to have beneficial effect on colon , prostate and breast cancers.

5 DAILY servings of vegetables and fruits daily was required to reduce the cancer risk and the effect is more stronger in the older subjects…. A recommendation by the National Cancer Institute….