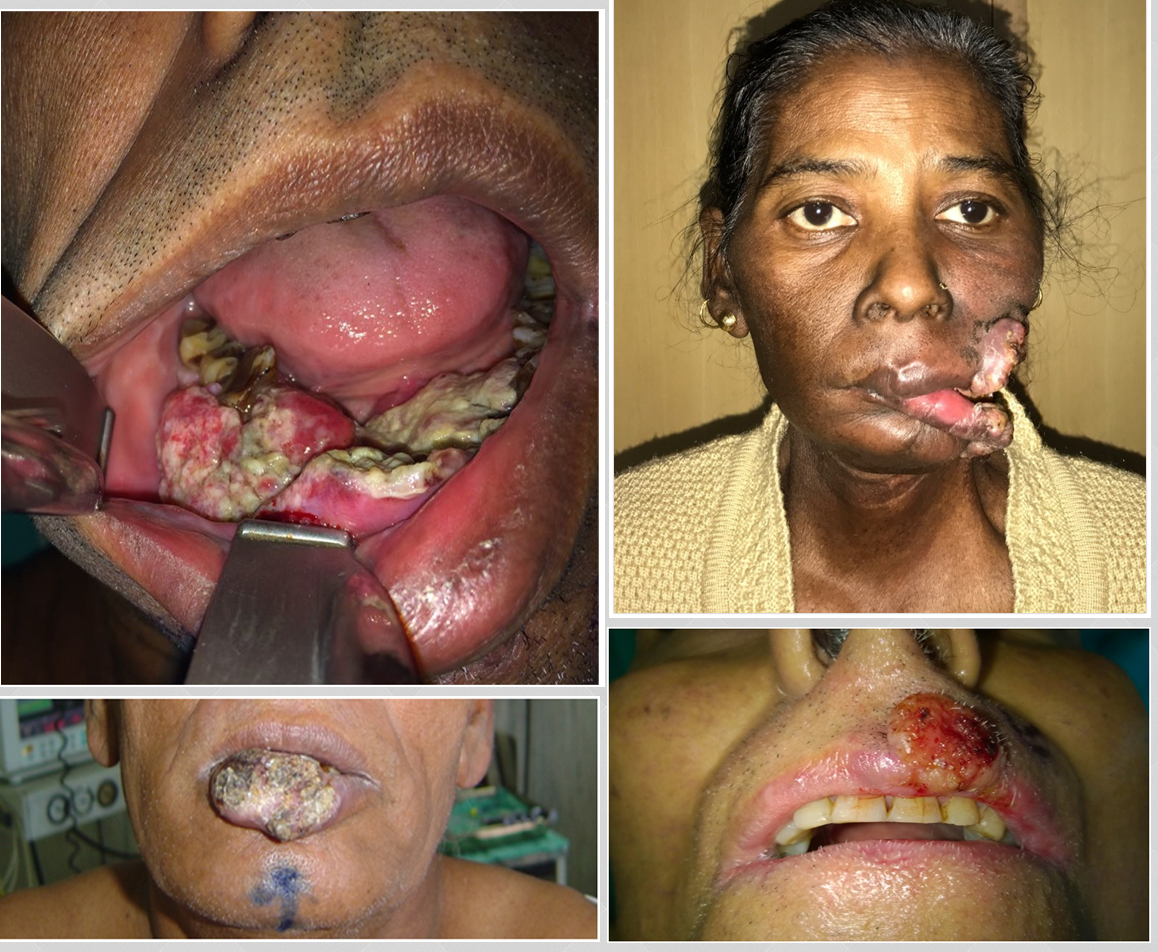 The most common cancer in India are oral cavity carcinoma and our country has maximum number of these cases when compared to the world statistics. Approximately 75,000 – 80,000 new cases are diagnosed every year. Major proportion of these cancers occur in an age group of 50 to 70 years.

But lately, it has been seen in children as early as 10 years of age. Men are two to four times more prone in comparison to females due to their behavioural and life style patterns. Though this anatomical area is easily amenable to visual examination, unfortunately 65-70% of the patients present in the advanced stage of the disease. Often there is a diagnostic delay because of varied reason.

Lack of awareness, fear of being diagnosed with cancer, lack of access to good medical facility and resources, are reasons to name a few. Of the 2,00,000 deaths which occur worldwide due to oral cancer annually, 45-50,000 deaths happen in our country itself.

1. TOBACCO : 90% of the oral cancers are attributed to consumption of tobacco, smoked or the chewable form. According to our statistics 57% of the men and 11% of women between the age group of 15 – 49 years smoke. Bidi being the most popular smoked form of tobacco in India, accounting for 34% of the tobacco consumption, these cancers are 5 to 10 times higher among the smokers than the non- smokers. Hookah (Haryana), Dhumti (Goa) , Chutta (Andhra Pradesh) , Hookli (Gujrat) are the various popular forms in use in our country. The number of bidis/cigarettes smoked per day, longer duration of smoking, younger age for the start of smoking were key provoking factors for oral cancer. The chewable forms, viz. betel quid, pan masala, Gutkha, oral snuff, dip tobacco though do not have an element of smoke, are more addictive than the smoked form and contribute to more than 50% of the oral cancers.

2. ALCOHOL : It is an independent risk factor. People who smoke and drink alcohol, there is a 30x higher risk of this cancer. In one of the hospital based study, the risk of oral cancer increased to 123-times if the individual smoked, drank alcohol and chewed betel quid.

3. ARECA NUT (Supari) : Less talked about but an important independent risk factor in the causation of Oral cancer is Areca nut, sold popularly as Gutkha. Oral submucosal fibrosis, seen as stiffness of the oral mucosa is commonly associated with it’s consumption. Countries like India, Pakistan, Sri Lanka, Bangladesh, Taiwan and China have heavy consumers of this substance. Arecoline found in this nut, is known to be the fourth most psychoactive substance in the world after caffeine, alcohol and nicotine. Considered to improve digestive abilities, areca is known to relieve stress and produce elation. Also known for it’s anti- inflammatory, immunosuppressive activity, habitual use of areca leads to dependence. Hence quitting areca causes similar cravings as does quitting of smoking. At present there are very few Nicotine Replacement Therapy(NRT) products specific to gutkha cessation. These products in fact don’t take into account the oral sense of gratification caused by physical form and flavouring agents found in gutkha. But a sad true fact is that despite the awareness of the associated health risk with the use of areca nut, no health campaign has been initiated.

4. ORAL HYGIENE : Poor oro-dental hygiene contributed to 32% and 64% increased risk of oral cancer in men and women respectively. Sharp teeth, constantly irritating the oral lining, has been a causative factor for initiation of oral cancer. Prolonged use of poorly fitting dentures are also contributory to the increased risk .

5. DIET : Diet rich in red meat, processed food (nitrates/nitrites) and excessive spices were associated risk factors in oral cancers. But dietary fibres derived from fruits and vegetables had a strong negative association with the disease. It has been seen that high consumption of Vitamin-C and diet rich in beta-carotene and green tea with abundance of polyphenols, an anti-oxidant, had a protective role in prevention of oral cancers.

6. SUNLIGHT EXPOSURE : Excessive exposure to sunlight has a bearing on lip cancers ,esp. for people living in the equatorial / tropical regions.

Oral cancers are primarily treated surgically. Radiotherapy and chemotherapy is added to the treatment depending on the stage of the disease. Major deterring factor in the treatment of these cancer is facial disfigurement, problems in speech and swallowing, because of which patients may refuse treatment and resort to alternative therapy. But the curability factor can be optimised if patients follow instructions of the specialist. The so called mutilating surgeries have been greatly reduced due to technological advancements in the field of plastic and reconstructive surgery, anaesthesia and intensive care, hence restoration of facial cosmesis and functionality is no more an issue.

WAYS TO GO AHEAD:

1. Biopsy causes the cancer to spread fast, often a reason why many patients refuse to undergo biopsy. This is a false belief. Following the procedure, the associated inflammation may make the lesion look bigger which is just temporary. But the procedure is essential, to prove the diagnosis, to identify the tumour type and also to plan a treatment strategy .

6. Herbal cigarettes are safe : Though these cigarettes do not contain tobacco , they do produce tar and carbon monoxide which is dangerous for health .

7. Hookah smoking is safer than cigarettes and bidi’s : Often people have this notion, because of the belief that water in the hookah chamber filters the smoke of it’s toxins . According to WHO, a typical one hour of hookah session is close to smoking 100 cigarettes .

Oral cancer is a major health problem and it’s incidence will increase by 2020 -2030 in both the sexes. Case control studies in India have related the increase in oral cancer incidence to the low socio- economic condition which is further related to factors of malnutrition, health care, risk behaviours and poor living conditions .

Early detection and prevention will reduce it’s burden. Since oral cavity is amenable to visual examination, early detection is the key word. More than 85% of all oral cavity cancers can be diagnosed by visual examination alone. Sadly, most patients present in the advanced stage of the disease. Since 90%of these cancers are life-style oriented, oral cancers are highly preventable. Generating more awareness and educating the common man, especially the youth, will help make individuals feel more responsible towards their family and also to the nation. Early detection will eventually translate into better survival and less morbid treatment results.

Liquid Biopsy : A new non-invasive technique, is primarily a technique for identifying circulating tumour cells in the bloodstream. The presence of these cells in breast, colorectal and prostate carcinoma, have shown to be related to the overall survival in patients. This technique is now being used for Head and Neck cancers also. It is said that serial assessment of circulating tumour cells prior to surgical removal and post treatment might identify patients at risk for relapse or failure thereby help the treating physician intensify treatment for better outcome.